We are excited to share this post from New American Leaders’ Digital Engagement Intern, Sarah Shobut! She is joining the NAL Team throughout the summer and has an incredible New American story to share. We know she will do amazing things and is a New American leader to watch! 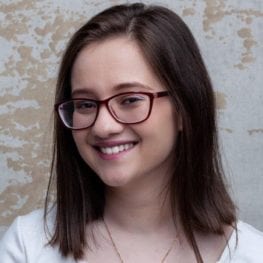 Who am I? Why am I here? Why New American Leaders? Well, I am an immigrant and New American. I am a woman. I am me, Sarah Shobut.

I was born and raised in Damascus, Syria; land of the oppressed, home of the brave. At the age of 12, my family and I packed our bags and said goodbye to our loved ones. On July 19th, 2012 I arrived in what I had been told was the greatest country in the world, the United States of America. This was a place where anyone and everyone can achieve the American Dream. But what is the American Dream? For me and my family, it wasn’t achieving fame or fortune. Like so many others who come to this country, our version of the American Dream was having a chance at creating a stable, prosperous life.

On that day in mid-July, I started my chapter in life as a New American. But what did that look like, especially as a 12-year-old child? When I first arrived in the United States, I did not know who I was, what I wanted, or what I needed to make my version of the American Dream a reality.

First and foremost though, I knew I needed to learn English. Being in a foreign country was a challenge in itself, let alone not speaking the language. But eventually, I slowly began to assimilate and to fit in. However, sadly one of the first things I experienced as I settled into my new home was the hostility towards immigrants and Muslims many Americans seemed to have. This was not something I had experienced before as a 12-year-old, especially coming from a predominantly Muslim country. It was these experiences that made me feel like I was somehow “other” in my new home country.

Like many New Americans, as the years passed and I began accelerating in English and recognizing the discrimination and even hatred some people held against immigrants and Muslims, I began losing my assigned Syrian and Muslim identity. I got too good at assimilating—I wanted to forget the little girl I was. But slowly, I started realizing how detrimental that was, how saddening that was. How could I ever erase who I am? How could I have my identity whitewashed by people who were filled with fear and even hatred against those who they label as “other”? It was then that I realized that my identity as a child and my identity as an American did not have to be separate.  I promised myself that from then on, I would wear my identities as an immigrant, Muslim, and woman proudly and unapologetically as part of my New American identity.

That is also why, after my junior year in high school, I made up my mind to study political science and legal studies in my undergraduate studies with the hopes of going to law school afterward. My life turned around: I went from being the quiet person to being outspoken about my beliefs and standing up against injustices. I took whatever knowledge I had, shared it, and constantly searched for more. Whether that was by going to conferences at the United Nations, attending rallies and protests, or organizing local marches, I always found a way to raise awareness and to promote social justice, freedom, equality, inclusion, and diversity to every marginalized and underrepresented group of people. I firmly believe that everyone should be able to live a life free of prejudice and discrimination regardless of the color of their skin, gender, sex, religion, ethnicity, or ability status.

This desire for justice, inclusion and my increasing interest in activism is what ultimately drew me to join New American Leaders.

In my undergraduate career, it was a struggle to find a true nonpartisan organization that promoted and fought for the complete inclusion of immigrants in the political system of the United States. Joining the New American Leaders is nothing short of inspirational. Being a minority and dreaming of running for public office can be daunting, especially when faced with the deep reach of the political establishment and other barriers. NAL helps break down these barriers and build a more inclusive political space for everyone, a mission that is very needed during this divisive time. I truly cannot wait to implement the knowledge I gain during my time as the Digital Engagement Intern.